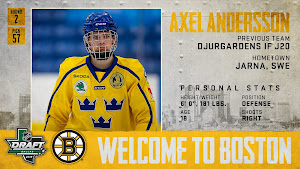 The 2018 NHL entry draft was this past Friday and Saturday. The Bruins had no first-round picks but they came away with two defensemen and three forwards in the following rounds. Below is some information about the possible future-Bruins.

Most of this information came from bruins.nhl.com and other hockey-related web sites. You can view our past Bruins drafts blog posts over on our archived blog.

Bruins free agent signings and who is ...

This site uses Akismet to reduce spam. Learn how your comment data is processed.

Get Bruins Gear on Amazon